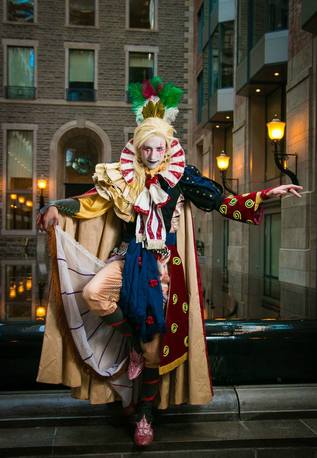 Niq van der Aa, known online as Niq Cosplay (formerly Detailed-Illusion), is a cosplayer, model and costume designer from Ottawa, Ontario. He has been cosplaying for 10 years, going to his first con when he was thirteen as Fai d. Flowright from Tsubasa (which to date is still his all-time favourite fictional character). He is an avid gamer, a lover of fantasy and a frequent reader of both American comics and Japanese manga. In high school, Detailed-Illusion studied theatre where he ended up focusing on backstage work as a set and costume designer. After high school, he toured a theatre show to the Edinburgh Fringe Festival in Scotland, for which he was both a costume and set designer, as well as a performer. Since, he has dabbled in Fashion Design school (finding it far too slow paced and restrictive for the cosplayer/costumer he is at heart), worked as a costume designer for an independent film project, and of course continued to go to as many cons a year as he can afford, creating plenty of new costumes for each one. He has worked his way up the ranks, entering masquerades in America and Canada, and is now a master level cosplayer. He considers his specialty pattern drafting, and detailed sewing and accessory work. As part of team "Detailed Mess" (cosplaying Fai D. Flowright and Sakura from Tsubasa) has won the first World Cosplay Summit Canadian preliminaries and represented Canada along with Miss Messy Mia in WCS 2015 in Japan. His most notable awards in the Masters category were for Best Reinterpretation for his Genderbent Elsa (Costume-Con 32, 2014) and Best in Show for his Thranduil (Pop Expo 2013, where he was thrilled to show alongside popular cosplayers from Heroes of Cosplay).